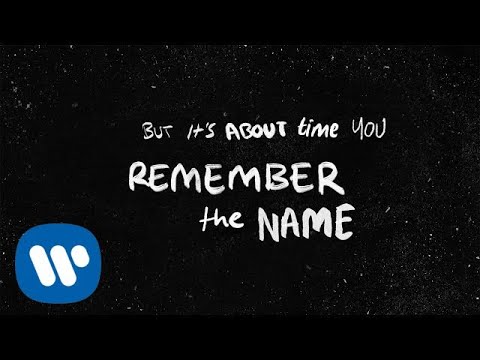 Fort Minor “Remember The Name”: You ready?! Let’s go Yeah, for those of you that want to know what we’re all about It’s like this y’…

You ready?! Let’s go
Yeah, for those of you that want to know what we’re all about
It’s like this y’all (c’mon!)

Mike! – He doesn’t need his name up in lights
He just wants to be heard whether it’s the beat or the mic
He feels so unlike everybody else, alone
In spite of the fact that some people still think that they know him
But fuck em, he knows the code
It’s not about the salary
It’s all about reality and making some noise
Making the story – making sure his clique stays up
That means when he puts it down Tak’s picking it up! Let’s go

Who the hell is he anyway?
He never really talks much
Never concerned with status but still leaving them star struck
Humbled through opportunities given despite the fact
That many misjudge him because he makes a living from writing raps
Put it together himself, now the picture connects
Never asking for someone’s help, or to get some respect
He’s only focused on what he wrote, his will is beyond reach
And now it all unfolds, the skill of an artist

This is twenty percent skill
Eighty percent beer
Be a hundred percent clear cause Ryu is ill
Who would’ve thought he’d be the one to set the west in flames
Then I heard him wreck it with The Crystal Method, “Name Of The Game”
Came back dropped Megadef, took em to church
I like bleach man, why you had the stupidest verse?
This dude is the truth, now everybody’s giving him guest spots
His stock’s through the roof I heard he’s fuckin’ with S. Dot

They call him Ryu the Sick
And he’s spitting fire
With Mike, got him out the dryer he’s hot
Found him in Fort Minor with Tak
What a fuckin’ nihilist porcupine
He’s a prick, he’s a cock
The type women want to be with, and rappers hope he get shot
Eight years in the making, patiently waiting to blow
Now the record with Shinoda’s taking over the globe
He’s got a partner in crime, his shit is equally dope
You won’t believe the kind of shit that comes out of this kid’s throat

Tak! – He’s not your everyday on the block
He knows how to work with what he’s got
Making his way to the top
He often gets a comment on his name
People keep asking him was it given at birth
Or does it stand for an acronym?
No he’s living proof, got him rocking the booth
He’ll get you buzzing quicker than a shot of vodka with juice
Him and his crew are known around as one of the best
Dedicated to what they do and give a hundred percent

Forget Mike – Nobody really knows how or why he works so hard
It seems like he’s never got time
Because he writes every note and he writes every line
And I’ve seen him at work when that light goes on in his mind
It’s like a design is written in his head every time
Before he even touches a key or speaks in a rhyme
And those motherfuckers he runs with
The kids that he signed?
Ridiculous, without even trying
How did he do it?

“Remember the Name” is the second single from his 2005 album The Rising Tied, released on October 4, 2005. But the song was leaked onto the Internet several months prior to the album’s release.

Ryu of Styles of Beyond is wearing an official Jay-Z T-shirt in the music video for this track because Jay-Z was an executive producer to The Rising Tied. Chester Bennington makes a cameo appearance in the clip.

“Remember the Name” was a promo song for the 2010 remake of The Karate Kid.

Remember The Name by Fort Minor